I had to "hide" my trash today.  I usually have to be pretty sneaky since it's really hard for my mom to resist "rescuing" empty containers, bones, bottles or boxes . . . and if I can get it in there and cover it up somehow then it generally will stay there.

Today I had to toss these VERY MOLDY oranges.  My mother brought them over in this bag - but I don't know exactly when.  I just had to subtly take the whole bag and covertly stuff them down the trash - otherwise mom would pick the bag out saying that not ALL the oranges are like this and that some might only have a bit of mold which would be easy to cut off . . . 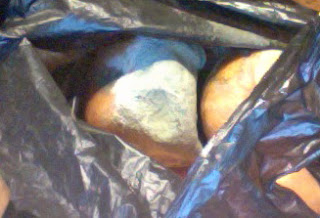 If mom would have found the bag - she would have taken it back out, but it's doubtful that she'd actually sort and cut said "good ones".   It's her M.O.

It may have been true - and I may have been entirely too wasteful,  but with childhood years of having dealt with moldy food, and in a position where I don't have to eat them now, I reserve the luxury of choosing not to save them.

I groan with annoyance as I tuck them under some crumpled trash - because I specifically told her not to bring over fruit or foods since we have all we/she needs or wants here, and have the means to buy anything she would like - but perhaps that why I found the bag- she didn't tell me about it.

She has an orange tree in her yard and it produces oranges abundantly - but she only likes to bring the oranges that have fallen from the tree (a lot!) so that we get the "eat em now or they mold" oranges.

We don't eat oranges that fast.

To her it is torture to think that the "perfectly good" oranges will be wasted.  Torture.

That's the way it is with everything.  So, big issues have been had when a little bit of milk at the bottom of my gallon jug has slightly soured.   When my mom is here I do not have the liberty to just toss it.  She insists on drinking it, or using it.  Even when we've had a fresh gallon ready in the fridge.  She absolutely insists.

So generally - if I want to throw something away while she is here, it has to be a covert operation. - I usually wait until she's gone and then I go through the house, the fridge, and freezer, around the bed she used, the one drawer designated for her when here, it's top, and toss out any other little surprises, salvaged trashed, bits of leftover toast or other foods someone didn't finish.

Email ThisBlogThis!Share to TwitterShare to FacebookShare to Pinterest
Labels: trash

I'm sorry. You are stronger than most. Keep up the good fight.

My mother no longer visits me and my contact with her is limited to a few times a year, but she was this way you describe most of my life. When I was a teen and young adult (I lived next door to her for years) I would come over when she was on vacation or visiting relatives or even out for the day and just bail her out when she wasn't there to object. She told all her relatives I was STEALING from her. Yeah, tossing moldy food (I think I counted-- no kidding-- 11 different colors of mold in her fridge once) containers, and yes-- my sisters sanitary napkins that were just falling out the trash all over the floor is STEALING to her.

Oh well. I wouldn't change any of my actions if I could go back in time. 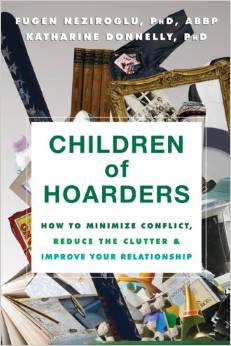 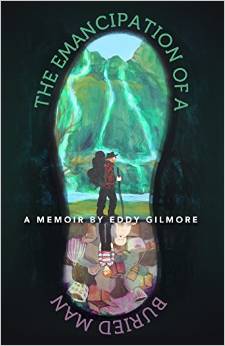